Fierce Ruling Diva is the Netherlands' musical flagship from the early years of House and Techno. From 1988, when everything in the scene still has to be invented, Fierce Ruling Diva has been preparing the way. That does not happen by itself, rather: it has to go against the grain.

Jeroen Flamman and Jeff "Abraxas" Porter live in Jeff's hometown of New York in the mid-1980s. In the South East part of Manhattan, known as the Lower East Side. An emerging, lively, creative neighborhood with an almost Amsterdam underground atmosphere. Abraxas: "It was great there. We went out at clubs like Traxx, Paradise Garage, The Limelight, Save The Robots, The Tunnel, The World and The Pyramid. A club where many artists came. The Velvet Underground once started. "In New York, the duo encountered a completely new sound: house, techno and acid, played by DJs such as Frankie Knuckles and Junior Vasquez. "Now they are heroes, but we were all kids back then," says Flamman. The two immediately know that this would be their music of the future. Both worldwide and their own future.

Regularly visiting Amsterdam, Jeff & Jeroen notice that very little is happening there in the field of House, Acid or Techno. The duo decides to work on it. In 1988 they start organizing acid parties in the capital in locations such as Crea and PH 31. With Eddy de Clercq and Crazy Shaun they take over the turntables in the weekends in the DOK, De Odeon Kelder - diagonally opposite the RoXY on the Singel in Amsterdam. Flamman: "We would launch Jeff as a DJ and I would do the production. But that turned out to be something else. "

In the first instance, the focus is fully on organizing party evenings and playing in clubs and parties in warehouses in the Port area. Flamman: "We wanted to play house and acid all night long, but in the early days that was almost impossible. There were still too few records available. Then the idea arose to start producing records ourselves. "

In the summer of 1989, the two rented a studio on the Prinsengracht with a drum computer, two synthesizers and an Atari. They record two songs within two days: "I Don't Wanna Be A Freak" and "Feelin 'Fly". Fierce Ruling Diva is chosen as the group name. Abraxas: "From a Dean Martin song. We sometimes saw them live when we lived in New York. "

The established record companies have no interest in Acid, House or Techno. And so they start their own label: Lower East Side Records, the name again an ode to their old neighborhood. To reinforce the statement, the Amsterdam group is full of posters: "DJs take matters into their own hands." And that's right: Flamman & Abraxas do everything themselves. On the one hand because they brought a stubborn DIY mentality with them from the punk era, on the other because there is simply no other way: there is no ecosystem for electronic music yet.

Under the name Planet E they give parties in Jeroen's apartment on the Albert Cuyp. Nobody really knows how to do that, organize a rave. Everything must be discovered and invented by yourself. The scene is still very small: in the artistic club RoXY, house is embraced by the DJs - although the audience does not want it yet - and there are some parties in the Jan van Galenhal. And there is Planet E, from Flamman & Abraxas. First on the Damrak, later in a club in the Koggestraat. The parties are wild and underground.

Lower East Side Records is the umbrella under which all the Fierce Ruling Diva activities take place: the parties, the clubs and the music. The label plays a vital role in the early stages of many great careers. For example, hardcore icon Dano and techno legend Dylan Hermelijn record their joint first album in Planet E, where Flamman has set up all the equipment on the dance floor and acts as producer. It is the first Dutch acid record: 2001 - The Sound of Planet Earth. In a short time, Lower East Side releases tracks by Orlando Voorn (including hit Kiss The Sky), Eddy Fowlkes, Juan Atkins and Cybersonik, the alias of the young John Acquaviva and Richie Hawtin. "They weren't allowed to release their label with us under their own name," laughs Flamman.

The big breakthrough comes in 1990 with Rubb It In. Abraxas: "We pressed 10,000 plates of it. An insane number for that time. And certainly for an independent label. "Rubb It In is an instant classic and puts Lower East Side Records firmly on the international map.

It just kept going. The song also appeared on all kinds of compilation CDs. Later in 1993 we calculated that there were about a million copies of Rubb it - more than any Dutch dance track of that time.

Even today, Rubb It In still sounds indestructible on the dance floor.

In 1991 Fierce Ruling Diva presents "House Nation '91 - Night of the Loops" in Rotterdam. At that time it was the largest dance event in the Netherlands. The entrance tickets is a specially pressed 7 ”single with the song" HouseNation ", for which collectors are now killing. The second album Subtopia - Forever Underground has contributions from Frequency (Orlando Voorn) and Cybersonik, the alias of the young John Acquaviva and Richie Hawtin. "They weren't allowed to release their label with us under their own name," laughs Flamman. Fierce Ruling Diva is the international representative of Dutch electronic dance, in the young scene of global pioneers. This is clear from the presence at international music fairs such as the Midem in Cannes, the New Music Seminar in New York and the Winter Music Conference in Miami. With releases on the REACT label and a stream of compilation CDs, the group performs extensively in the thriving UK rave scene. Thousands of young people gather here in a meadow to celebrate the new music.

As an electronic live act the group joins an infamouns list of names such as 808 State, The Prodigy and Moby (who also provides remixes on the EP Amsterdam Slide). Abraxas: "The electronic live acts could be counted on one hand." Flamman: "It also resulted in comments. Where is your guitar? And you don't have a drum kit! "But more often there are great successes. In 1992 the group performed at the renowned club Limelight in New York at the invitation of "Club Kids" Michael Alig and DJ Keoki. Abraxas: "And three days later we were in Berlin on Christopher Street Day with the Army of Lovers and Marianne Rosenbaum from Ich Bin Wie Du." Flamman: "That was a bizarre highlight." The group is the first Dutch act on the Billboard Dance Chart and that has resulted in multiple tours in the States, Canada and Mexico. Note: twenty years before electronic music finally breaks through there as EDM. Josh Wink plays a big part in FRD's American success. Although it is clearly still a cowboy time: when Fierce Ruling Diva also visits Mexico during a tour through West America, it turns out that the organizer has made a mistake in the spring break data. Flamman: "We were there with Joey Beltram, Guru Josh, Innercity in a tent meant for ten thousand people… completely empty except for a handful of Mexicans. One of the best performances. Haha! "

In the Netherlands, Fierce Ruling Diva bring their sound throughout the country by frequently performing in various music venues. Dancers Sander Lippman and Natarcia Ommen (nowadays known as DJ Natarcia) are a regular part of the act. FRD is a permanent name at Multigroove, the infamous and very influential illegal raves in Amsterdam-West. Flamman & Abraxas perform there just about every week, in front of a frenzied audience of 1500 people - unprecedented in size at the time. In 1993 two full albums by Fierce Ruling Diva are released. Anarchic Adjustments and A Great Man Once Said. The latter also features American MC Sweet 'n' Lo. She will be added to Fierce Ruling Diva for the occasion, to perform at the biggest party in Europe: Mayday - The Judgment Day in Dortmund. To this end, it is "rehearsed" on Multigroove, resulting in the live CD Live at Multigroove.

In 1994, FRD stops producing, performing and organizing events and changes tack: in downtown Manhattan they open import specialty store Subtopia Records. Old friend Moby is a regular there. More than a year later, they transfer the business to Jonathan Kadish, who will develop it under the name Sattellite Records into the largest chain of electronic music stores in the US. It is then 1995 and the duo is back to producing. With a remix for Technohead's I Wanna Be A Hippie, as Flamman & Abraxas and with The Party Animals, they produce hit after hit after hit. The Netherlands is under the spell of (happy) hardcore and Flamman & Abraxas play a leading role. After this extremely successful and intense period, Fierce Ruling Diva returns with a DJ / live set. After the peak of the gabber there appears to be a great need for the sound and vibe from before the hardcore era. With this, the group performs at Houseqlassics, Dance Valley, Digital Overdose and many parties in the legendary Hemkade in Zaandam. New music will also be released: Floorfiller II & The Bitch, a double on Rotate Records. And another old love is also blooming again: throwing parties. In 2003 Fierce Ruling Diva organizes a regular evening in the Amsterdam club scene with weekly Electro Clash night Divine in the Mazzo. In Paradiso they organize Love & Pride for 2 years in a row and they bring Marc Almomd, Princess Julia, Vive La Fete and Lady Miss Kier (Deee-Lite) to Amsterdam.

In 2023, Rubb It In and You Gotta Believe (Atomic Slide) belong to the classics of Dutch electronic music - and have been remixed countless times, by Hardfloor, Chocolate Puma, Bart B-More, BK, Koen Groeneveld, among others. Fierce Ruling Diva still performs live in special cases. That happened at MysteryLand, Valitfest, Milkshake, Wooferland and the Amsterdam Dance Event. During these performances, the group is welcomed for what they are: the absolute pioneers of the Dutch dance scene. 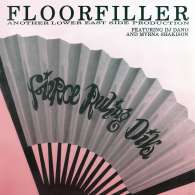